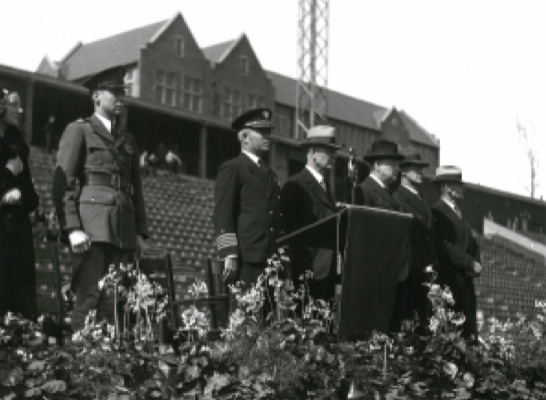 This is the second of a series of lightly fictionalized vignettes about The Biltmore Hotel and Apartments in Atlanta. I am writing these vignettes in collaboration with Biltmore Radio (biltmoreradio.org). Soon they will be recorded and available for streaming on the Biltmore Radio site.

Winston Churchill, former chancellor of the British exchequer and vice lord of the admiralty, sitting in convalescence in the guest quarters at the Virginia Executive Mansion, dictated the following telegram:

WHATEVER OTHER PORTION OF MY AMERICAN TOUR I AM FORCED TO CANCEL I CANNOT FORGO THE VISIT TO ATLANTA. I AM PARTICULARLY INTERESTED IN THE SOUTH AS BEING CLOSER TO ENGLAND IN HER PEOPLE THAN ANY OTHER PART OF THE COUNTRY AND I AM GIVEN TO UNDERSTAND THAT ATLANTA IS THE METROPOLIS OF THE NEW SOUTH. YOU CAN BE ASSURED I WILL BE IN YOUR CITY ON FEBRUARY 23.

The message’s recipient was Russell Bridges, a prominent Atlanta businessman and general manager of the Alkahest Lyceum, who would be Churchill’s host during his stay in the city.

Churchill’s lecture tour throughout the country, an effort to recoup his losses from the 1929 stock market crash, had come perilously close to being his last. On December 13th, shortly after his arrival in New York City, he was struck by a taxi and almost killed while attempting to cross Fifth Avenue. He had been looking for the residence of his friend Bernard Baruch. And he was running late. He stepped into the street looking the wrong way, an unfortunate mistake that he attributed to a lack of familiarity with American driving customs.

“I have been run over by a motorcar in America,” he said. “All those worries about being late are now swept away.”

He was rushed to Lenox Hill Hospital on 76th Street.

And now, two months later, he was on a slow mend and convalescing in Virginia after having visited with President Hoover in Washington, DC.

Churchill, ever the optimist, had figured out a way to finagle a silver lining out of a near tragedy. America was in the throes of a decade-long alcohol prohibition. On a prior visit with his son Randolph, in 1929, he had been incensed when customs officials searched his bags and confiscated his flasks of whiskey and brandy. Fearful of another tragic loss of copious quantities of liquid courage poured down the drain––or, more likely, drunk in a back room by the confiscators––he had decided to leave the libations at home this time. Now stateside and confronted with forced abstinence, he hatched a plan to take advantage of his accident and outwit the authorities.  He convinced a New York physician named Otto Pickhardt to write a letter:

This is to certify that the post-accident convalescence of the Hon. Winston S. Churchill necessitates the use of alcoholic spirits, especially at meal times. The quantity is naturally indefinite but the minimum requirements would be 250 cubic centimeters.

The letter worked. Churchill was assured that, for the remainder of his stay in the United States, he could indulge his love of booze at his leisure and without fear of reprisal. To the tune of four doubles a day––at least.

In early February, prior to Churchill’s I cannot forgo Atlanta wire, Russell Bridges had traveled to New York with his daughter Eugenia, described by a local newspaper reporter as an “attractive Atlanta belle.” They met with Churchill, his wife Clementine, and their daughter Diana, a “brunette with a trim, slender figure and a decided air of chic.”

The goal of the trip was to secure Churchill’s commitment to visit the Gate City of the South. Russell plied his influence. Eugenia bonded with Diana with stories of dinner dances and handsome southern beaus. The strategy worked. The distinguished English statesman and his comely daughter committed to a visit later in the month.

There was the issue of where to stay during their visit. Churchill, in addition to being a prolific drinker and afficionado of the most sought-after cigars, was a high-maintenance traveler, accustomed to the finest accommodations, unparalleled attention to detail, private bathtubs, oversized towels, plentiful quantities of the best jams, cheeses, fruits, and meat. And, of course, the perfect environment to indulge his love of spirits and smoke.

In Bridges’ mind, the choice of lodging was never in question. He would secure residence for his distinguished visitors at The Biltmore Hotel, an inn befitting the statesman’s stature and demanding nature.

On the morning of Tuesday, February 23rd, Churchill, accompanied by his daughter, arrived in Atlanta on a special railcar provided by the steel magnate Charles Schwab. A chauffeur provided by Bridges collected them at the train station and drove them to The Biltmore, where they checked into the luxury suite reserved in Churchill’s name. He knew from the moment he arrived that Bridges had recommended well––that the city’s premier hotel would not disappoint. And, thanks to Dr. Pickhardt, he could imbibe freely in the privacy of his suite and away from prying eyes.

Churchill’s first order of business, once he and Diana had settled into their spacious accommodation, was to summon a porter. Thank God the powers that be in Washington didn’t see fit to outlaw barware, he thought. Within minutes, there was a knock on the door. He was greeted by a young man holding a brandy snifter. As soon as the porter had left, Churchill retrieved from his traveling bag a bottle of jackass brandy, secured from a reliable backstairs source in Virginia. Not his customary Prunier or l’Hertier de Jean Fremi-court. But it would do. He half-filled the snifter and fired up a Romeo y Julieta. He settled into the overstuffed leather chair by the window and gazed out at the Terrace Garden, enjoying a brief respite before the obligatory reception of visitors.

Later that afternoon, he conducted a protracted meeting in the drawing room of his suite with newspapermen from the city and beyond, pontificating on international affairs and speaking out against the dreadful 18th Amendment, contrasting the situation in America to that in Canada, where the spirits flowed freely.

One aspect of the trip gave Churchill a certain angst. While he had achieved international fame and was the press corps’ celebrity of the moment, he knew his daughter would captivate the hearts of the debutantes of Atlanta––and the passions of the freshmen at the Georgia School of Technology, a mere stone’s throw from The Biltmore.

At 8:30 on Tuesday evening, Churchill was introduced by former Governor Hugh Dorsey to an overflowing audience at the Wesley Memorial Chapel. His lecture to the crowd was on the Destiny of the English-Speaking Peoples.

“We have quarreled in the past,” he said, “but even in our quarrels great leaders on both sides were agreed on principle. Let our common tongue, or common basic law, our joint heritage of literature and ideals, the red tie of kinship, become the sponge of obliteration for all the unpleasantness of the past.”

Diana, sitting in the audience, beamed with pride.

The next morning, Diana had played the gracious hostess in their suite at The Biltmore to Mrs. Russell Bridges, Miss Eugenia Bridges and others. According to an Atlanta Constitution society writer who was present, she “offered the visitors cigarettes and chatted vivaciously.”

Then she and her father walked the few blocks to Grant Field, on the Georgia Tech campus. They would review Army and Navy ROTC cadets, and he would give a brief speech.

Two cadets, a lieutenant and an ensign, escorted Diana, dressed in black crepe cut on plain and stylish lines, a close-fitting black chenille hat, black slippers and, in the words of the newspaper reporter, “accessories which emphasized her exquisite titian coloring, large gray eyes and extremely fair skin.” The cadets were, no doubt, as infatuated with her as she was with them.

“Military pageantry always thrills me,” she said, “and uniforms fascinate me.”

The Churchill party left later that afternoon to visit the historic battlefields in Chattanooga.

Miss Churchill said her preference would have been to stay in Atlanta to attend an evening dance at The Biltmore on a double date with Eugenia Bridges.

“American dances are so very different from those in England,” she said. “My chief regret at leaving Atlanta so soon is that I will not be able to attend a southern dance and meet more of the attractive young southerners. In England a girl considers it the proper thing to dance with her escort the entire evening. At first I did not understand your custom of cutting in, but my friends explained it to me and arranged that I have a rush. A different man every step leaves my head in a whirl, but on my next visit nothing will prevent my attending a typical southern dance.”

Diana Churchill was never able to experience the rush of “a different man every step.”

In late 1932, she wed the son of a South African diamond tycoon and baronet. Their marriage lasted only three years but, in the wake of divorce, she quickly jumped into another man’s arms, this time a Tory politician with whom she bore three children over the course of eight years.

While her coquetting days were over, there’s little doubt that she would have turned heads had she Lindy Hopped and Shagged on the Biltmore dance floor.