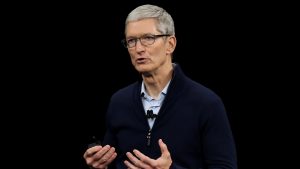 Picture this. It’s a mild summer evening in San Francisco. It’s 2018. CEOs and thought leaders from across the country have gathered for the invitation-only Fortune CEO Initiative. The movers and shakers of Silicon Valley are there.

Tim Cook is there. Not one to shy away from controversy (in keeping with the precedent set by his predecessor), he launches into a discussion of a variety of provocative issues. He had to know some of his comments would raise hackles at Google and Facebook. He’s done this before, most recently regarding the issue of data privacy.

In addition to addressing this issue again, he also addressed another controversial issue: online content curation.

There is perhaps no subject, other than data privacy, that is more emblematic of the differences between Apple and two members of FANG (Google and Facebook).

Apple chose to employ real, live human beings (fancy that) to curate online content for its “Apple News” related to the run-up to the midterm elections in November.

In Cook’s words, “We felt that the top stories should be selected by humans. … To make sure that you’re not picking content simply to enrage people.”

This approach flies in the face of the likes of Google and Facebook, whose decision makers have chosen to use machine-based algorithms to drive the most popular content to the consumer. As we know all too well, the most popular content is not always the highest quality, or the most factual. But there is a lot of money to be made through the use of algorithms to choose hot content. And the machine-based approach is eminently scalable, unlike any approach requiring human intervention.

Tim Cook said “I’m not being critical of people who do something different, but Apple has always stood for curation. We’ve always believed in quality, not quantity.” Of course, he said this as he launched into a criticism of his Silicon Valley counterparts.

So I’m curious. How do you weigh in on this issue? Please contact me today. I’d love to hear your thoughts.