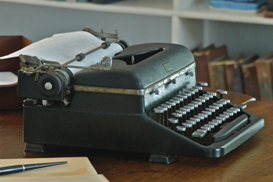 To get started, write one true sentence.

My wife and I have been watching the documentary on Ernest Hemingway by Ken Burns and Lynn Novick. If you haven’t seen it, I highly recommend it.

Hemingway did his best work very early in the morning. While I would never purport to compare myself to one of the most influential writers of the 20th century, I have shared in the past that I, too, prefer to write well before sunup. Such is the case as I write this piece on a Friday morning in May.

The journalist, writer, and professional poker player Larry W. Phillips wrote a wonderful book in 1984, Ernest Hemingway on Writing, in which he assembled some of Hemingway’s best advice on the craft of writing. In the book’s preface, Phillips writes:

Throughout Hemingway’s career as a writer, he maintained that it was bad luck to talk about writing—that it takes off “whatever butterflies have on their wings and the arrangement of hawk’s feathers if you show it or talk about it.”

Despite this belief, by the end of his life he had done just what he intended not to do. In his novels and stories, in letters to editors, friends, fellow artists, and critics, in interviews and in commissioned articles on the subject, Hemingway wrote often about writing. And he wrote as well and as incisively about the subject as any writer who ever lived…

While Hemingway never wrote about the art of creative writing per se, his letters, articles, and books are full of advice on the subject.

As a writer who is sometimes afflicted with writer’s block, I would like to focus on one such piece of advice:  All you have to do is write one true sentence.

Here is a passage from Hemingway’s classic memoir of Paris in the 1920s, A Moveable Feast:

Sometimes when I was starting a new story and I could not get it going, I would sit in front of the fire and squeeze the peel of the little oranges into the edge of the flame and watch the sputter of blue that they made. I would stand and look out over the roofs of Paris and think, “Do not worry. You have always written before and you will write now. All you have to do is write one true sentence. Write the truest sentence that you know.” So finally I would write one true sentence, and then go on from there. It was easy then because there was always one true sentence that I knew or had seen or had heard someone say. If I started to write elaborately, or like someone introducing or presenting something, I found that I could cut that scrollwork or ornament out and throw it away and start with the first true simple declarative sentence I had written.

At times I am beset by a creative stall, the inability to come up with original ideas or the right words to commit to paper. Fortunately for me, those occasions are

seldom. But when they crop up, when I feel like the frustrated writer in the painting The Passion of creation, by the Russian post-impressionist painter Leonid Pasternak (1862-1945), it can be painfully debilitating. That’s when I heed Hemingway’s advice and soldier on as best as I can, one true sentence at a time.

I have just broken free, so to speak, from one such creative stall, a week-long inability to advance a novel that I have been working on since last July. It is a two-part crime story

set in Atlanta in the early sixties. The writing of the first half of the book was relatively easy. Then, a little over a week ago, I hit a brick wall. The inspiration to advance the story was not there. The words didn’t flow. I went almost a week without writing a single sentence. But I did a lot of thinking, a lot of sitting in front of the fire and squeezing the peel of the little oranges (not literally, but you get the idea).

Three days ago, at three o’clock in the morning, my liberation from the creative stall came. I fired up my laptop and wrote one true sentence:

Then I wrote another true sentence. Then another. And another. I wrote for the next four hours. And I haven’t stopped writing since.

Hemingway had much to say about writing in his considerable body of work. Some of it I heed:

Always stop for the day while you still know what will happen next.

Don’t describe an emotion–make it.

Some, not so much:

Never think about the story when you’re not working.

All you have to do is write one true sentence.