Wabi-Sabi and the Craft of Writing 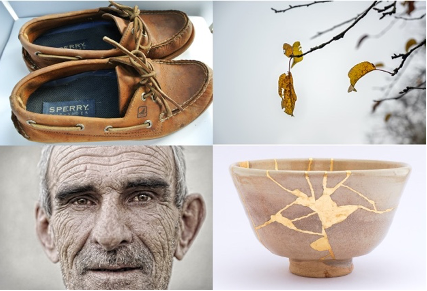 I don’t begin a piece, whether a short story or a novel, with some lofty notion of an ideal plotline that takes the reader through an exposition, a crescendo and a climax, a resolution and a denouement. Some authors write this way, and I respect them for it.

My approach is a little different, inspired by the ancient Japanese principle of wabi-sabi, which celebrates the beauty of imperfection.

My characters, with all their flaws and imperfections, their tics and eccentricities, their peccadillos and peculiarities––they are the agents who tell me what to write, in what direction the story must go, how it will end. I trust them. I trust their judgment. Without them, there would be no story. My characters live inside me––when I’m awake and when I sleep. They speak to me. In a sense, they devour me. Without them, I wouldn’t be the writer that I am, and their stories would never be told.

If you are accustomed to writing in a different way, or to not writing at all, this may seem like an odd construct. Do I suffer from some sort of multiple personality disorder? Do I hear voices? You could argue that, perhaps, I do––not in the psychiatric sense (at least I hope not) but in the sense that the richness of the characters in my stories cannot come out unless I give them the freedom and the power to do so.

If I imposed a predetermined plotline on them, they would never have the opportunity to truly be who they are. This doesn’t mean that my stories don’t have gripping plots. They do. It’s just that my characters define the plot, rather than the other way around.

So what does this have to do with wabi-sabi?

Wabi-sabi is about accepting and embracing the transitory nature of life and our surroundings, impermanence, and imperfection. Wikipedia tells us it is sometimes described as an aesthetic of “appreciating beauty that is imperfect, impermanent, and incomplete in nature.”

The concept derives from ancient Buddhist teachings. Wabi, in its modern-day context, refers to simplicity and to the quirks and anomalies, imperfections if you will, that surround us, in nature and in the things we make and do. Sabi, on the other hand, refers to the beauty that comes with age and impermanence––think of the patina that forms on a well-worn piece of furniture––and in the elegance that derives from visible repairs.

A companion concept, also derived from Buddhist teachings, is kintsugi, the Japanese art of repairing broken vessels by accentuating the repairs through lacquering combined with powdered silver, gold, or platinum. It is a physical embodiment of the concept of sabi.

Let us, for a moment, step away from the craft of writing and think about wabi-sabi in a broader context. How does it impact us? Here are a few examples from my own daily life.

First, my shoes. I have a thing, as they say, for old, weather-worn shoes that are seemingly on their last leg but, for me, are just getting broken in. I refuse to get rid of them, even when cajoled and shamed by family members. “You’re wearing those old things?” they will say. “Can’t you afford new shoes?” Surely, I can. But it’s the beauty and comfort of the old, the imperfect, the incomplete (especially when the soles are worn down to virtually nothing) that I relish. There’s nothing more comfortable than a well-worn pair of shoes. That’s wabi-sabi.

As I write these words, November has come to an end and winter is right around the corner. Most of the leaves have fallen from the trees, but a few remain. I love autumn. It’s my favorite season. In many ways, it’s the perfect manifestation of wabi-sabi. I revel in the beauty of the last colored autumn leaves on bare branches against a grey sky. In the imperfection and transience of nature. In the beauty that comes with age and impermanence. That’s wabi-sabi.

We live in a throwaway culture, one in which the pursuit of perfection trumps all. Why do we strive for perfection instead of enjoying the transience, the understatement, the flawed beauty before us? I recently broke a ceramic lamp. Rather than throwing it away, what if I channeled my inner kintsugi, what if I repaired it, accentuating the mend points? Would I perhaps end up with something just as beautiful as I had before, but in a different way?

I see my characters that way: as flawed vessels. Aren’t we all?

If we weren’t, we wouldn’t be real. My characters wouldn’t be real. And my stories would end up flat, lifeless. It’s their imperfections, their impermanence, their transience, that make them who they are. And it’s these qualities that breathe life and vigor into my stories, not some perfect plot that I stive from the outset to achieve. Wabi-sabi in writing leads to a way of seeing the world that results in greater creativity.

The application of wabi-sabi in writing in Western culture goes back at least two-and-a-half decades. American artist and writer Leonard Koren published a book in 1994 called

Wabi-Sabi for Artists, Designers, Poets & Philosophers. And in 2006, novelist Richard Powell wrote Wabi Sabi for Writers. If you’re interested in reading more about the subject, I recommend both of these books. They are truly illuminating.

In closing, I leave you with this quote from the musician Leonard Cohen: “There’s a crack in everything, that’s how the light gets in.”